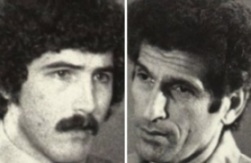 Kenneth Bianchi and Angelo Buono strangled twelve women in Los Angeles between October 1977 and February 1978.  They would usually pick up women by posing as police detectives or soliciting clients.  They would then tie the woman up and rape and sodomize her and then strangle her, dumping the bodies in the familiar places of L.A.

The newspapers called them the Hillside Strangler as the police did not release the information that they knew them to be two killers.  Bianchi and Buono owned a prostitute service with several employees.

The murders started when a prostitute had sold a bogus list to Buono with the names of probable clients.  When Buono discovered it to be fake, he took his revenge out on the prostitutes friend, Yolanda Washington by raping and killing her.  He carried out the crime with his cousin Kenneth Bianchi, it was obvious that they were so obsessed with rape and murder that they became serial killers.  When the two were together it was an explosive combination of personalities that drove them to kill.

On January 1979, after 12 murders, Bianchi had moved to Bellingham, in Washington State.  He had followed his girlfriend who had moved there with his newborn son, on reccomendation of Buono.  Bianchi had supported his son by taking up a job as a local security guard.  Soon the obsession to rape and murder was so strong that he killed two women whom he had offered a house sitting job.  It was these murders that led to the suspicion of Bianchi because he had been metioned in the victims conversation the previous day and on further investigation fibres on the victims matched ones found on Bianchi's clothes.  When the police searched Bianchi's house they discovered jewellery that belonged to the Hillside Stranglers victim's.

Police from L.A. travelled to Bellingham and interviewed Bianchi.  From the evidence and the similarities of the murders, they knew that Bianchi was one of the Hillside Stranglers.  On further questioning Bianchi revealed the name of Buono.

Bianchi, who was already facing charges on the powerful evidence, gave police the story of how his crimes were committed by his multiple personality - Steve.  But when under hypnosis and displaying unusual actions for a multiple, a doctor said he was faking it to prevent the death penalty.

Bianchi who was even more desperate to avoid the death sentence, agreed to testify against Buono.  The police had alot of evidence to convict Bianchi, and a testimony by Bianchi was certain to convict Buono.