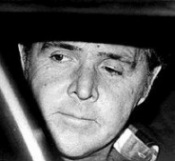 On 15 June 1983 while in jail for a minor weapons offence, and on suspicion of two murders, Henry Lee Lucas admitted killing over three-hundred and fifty people.

Lucas had spent most of his life from 1960 to 1975 in jail.  After his release he had an unsuccessful marriage (which ended when his wife realised he was having sex with her two small girls) and lived for a while with his sister Wanda, leaving when she accused him of sexually abusing her young daughter.

In 1978 Lucas was to meet his lover and friend Ottis Toole in a soup kitchen in Jacksonville, Florida.  Ottis Toole had a long prison record for car stealing and petty theft, and he invited Lucas back home, where he was soon regarded as a member of the family.

In 1982 Lucas fled with Ottis and his niece, 12-year-old Becky Powell (who was slightly retarded and grew up in a house of incest) and her younger brother Frank.  They lived on the proceeds of robbery - mostly small grocery stores.

Soon after Lucas and Becky fell in love.

Lucas told of how they drifted around the country killing from person to person.  Lucas and Toole killed many people and sometimes Becky and Frank would join in.  Lucas was a necrophiliac and Toole was a cannibal.  Toole also got sexually stimulated from lighting fires and burning down houses.

Eventually, Frank and Toole returned home to Florida, while Becky and Lucas continued on the road.

Becky soon became homesick, and begged Lucas to take her back to Florida.  Henry agreed and they set out hitch-hiking.

One night Lucas argued about her decision to go home, Becky had lost her temper and struck him in the face.  Instantly Lucas grabbed a carving knife and stabbed her in the heart killing her instantly.  After he violated her body.

Lucas’ confessions led police to some missing bodies.  He was soon considered as the worst mass murderer in USA’s history.

Lucas also told of how Toole killed a man who was sleeping by pouring petrol on him and igniting it.  Toole, who was already serving a fifteen year sentence for arson admitted it and was subsequently sentenced to death.

Many of Henry Lee Lucas’ confessions were later withdrawn by him saying they were false.

It is not known how many murders he did commit, some say it was at least two hundred murders committed alone, and sixty five by himself and Ottis Toole.  It has also been said that Lucas' amount was really just about 7 victims and that his 300+ tally was made up when he would look at old victim reports the police gave him, his real tally is unknown but is widely accepted over the 300+ mark.

Lucas has spent most of his life in jail and is facing a subsequent death sentence.